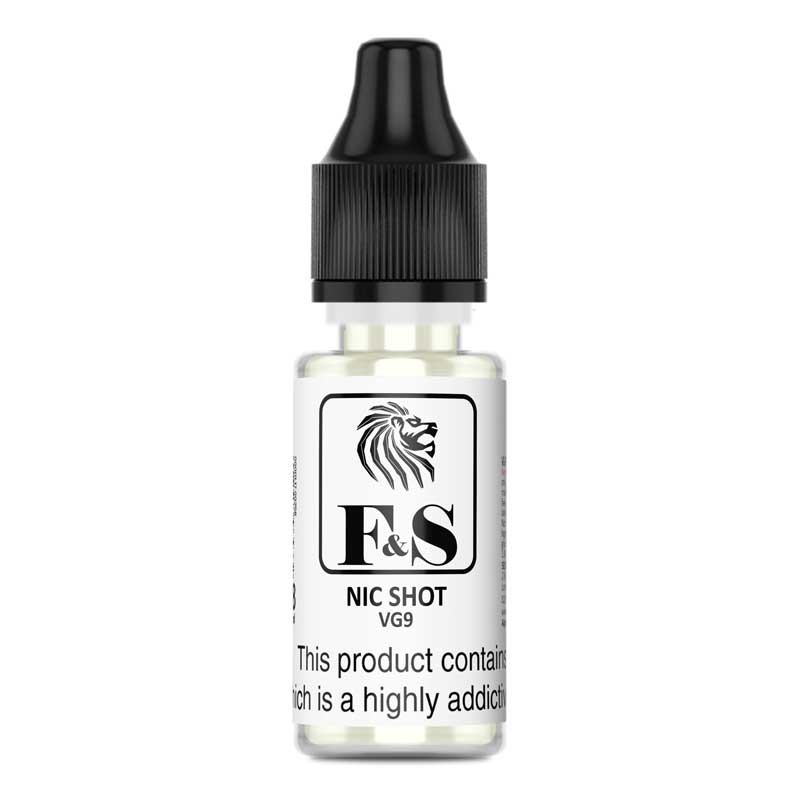 Our 9mg nicotine shots are made of Nicotine suspended in Vegetable Glycerine (VG) Base. These come in 10ml bottles, due to the new UK TPD laws, and are of 9mg/ml in strength. You can use these nicotine shots for boosting the nic strength of your shortfill e-liquids. Alternatively, if you are using them as DIY e liquid nicotine, you can also try our Premixed Nicotine Bases which gives you the option of a wide variety of available ratios.

To use the 9mg Nicotine Shot, simply add it to 50ml of 0mg e liquid which will give you 60ml of e liquid at 1.5mg strength. In such case you would get a high-vg e-liquid, which is suitable for more powerful DTL (direct-to-lung) tanks. For shortfills of 100ml size, two 9mg shots are required for boosting to 1.5mg strength.

If you have a 40ml shortfill like BOTTL SHAKER, you can combine 9mg nic shot with PG0 shot. In such case you would get 1.5mg 50/50 type thin e-liquid, which is suitable for less powerful MTL (mouth-to-lung) tanks.

If you just need some DIY e liquid nicotine to add to your custom mix, the exact calculations will have to be made to achieve the correct PG/VG ratio and nicotine strength.

The main advantage of 9mg nic shots is that you can boost your shortfill e-liquid to 1.5mg strength very easily. This is usually needed if you are using a high wattage vape device, or if you just want to switch to lower nicotine liquids.

Standard 18mg nic shots can also be used for the same purpose, however you might face some problems. For example, for 50ml shortfill e-liquid you would only need a half of 18mg nic shot bottle to boost it to 1.5mg strength, but in practice it is quite difficult to measure that half without liquid measuring equipment or scales. In such case you would be left with the remaining half of the bottle, which would either had to be stored somewhere, or just disposed of as waste. Additionally, using only half of the shot makes the final amount of liquid only 55ml, which distorts the final nicotine strength.

In summary 9mg nicotine shots are quite useful for making 1.5mg e-liquid, however if you just require DIY e liquid nicotine for your custom blend, then 18mg shots is a standard choice.

No customer reviews for the moment.

Only users who already bought the product can add review.
0
0/5 - 0 reviews
Add review